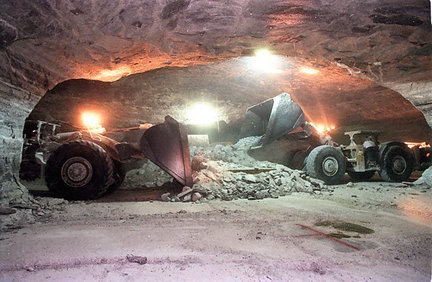 During the summer months, it’s common to take stock of your snow and ice management business strategies and consider which changes you might want to make for next winter. As you do this, it’s common to compare different ice melt products. One common comparison is Calcium Chloride-based products versus plain Rock Salt. While both are effective ice management products, there are considerations to keep in mind when deciding which to get and how much to order for next winter. As one of the leading ice melt suppliers in the Mid-Atlantic, we can help you take a look… Today we’ll explore the difference between Calcium Chloride and Rock Salt.

Yes, it’s true that Calcium Chloride costs more than common rock salt/bulk salt when you compare pound to pound. However, it’s important to compare effectiveness. Rock salt is nearly 100% Sodium Chloride and is only effective in temperatures down to 15 degrees. If you are located in an area with no risk of temps falling lower than that, rock salt will get the job done. However, in the Mid-Atlantic area where we are located, winter temps often fall below 15 degrees at night. At times like that, it’s best to use Calcium Chloride products like PELADOW™ Calcium Chloride Pellets, DOWFLAKE™, or ComboTherm™. All of these Calcium Chloride products are effective at melting ice and snow in temperatures down to -25 degrees (25 below zero!).

It’s important to note that sometimes there are additives in Rock Salt that help lower the effective temperature. For example, it’s not unusual to see Rock Salt with an additive such as liquid magnesium chloride to help it melt ice in colder weather. Just be sure you ask and know what you are getting before you spend a lot of money on a product that won’t get the job done and leave roads safe.

Because calcium chloride melting ice is an exothermic chemical, it has a substantial advantage over its related equivalents. If you’re new to the phrase, exothermic simply indicates that heat is created during the chemical process. This heat aids in the formation of the ice-melting brine stated earlier, kicking off the whole domino reaction when it comes to removing ice off surfaces.

One of the most important differences between calcium chloride ice melt as well as other ice-melting chemicals is this property. Almost all other deicers, after all, rely on their environment for heat. Calcium chloride, on the other hand, creates the ice-melting brine by acting as a heat source.

To give you an idea about how much heat calcium chloride can generate, a pound of it can increase the temperature of an open water gallon by over 30 degrees Fahrenheit! This chemical property of calcium chloride explains its capacity to maintain a realistic operating temperature significantly below that of any other traditional deicer in the dead of winter.

It also explains how quickly calcium chloride begins to function. While rock salt may take several minutes, if not an hour, to make a discernible change in an area, calcium chloride offers instant effects since it creates and dissipates heat over the contact area in a matter of a few seconds. That explains how it can clear enormous tracts of land in a matter of minutes.

No other product gets to work melting ice as quickly as Calcium Chloride products. For example, in the first 20 minutes after application at 20°F (-7°C), DOWFLAKE™ Xtra calcium chloride flakes melt approximately:

Calcium chloride is healthier for your pets

The harm that rock salt or sodium chloride does to our four-legged companions’ paws is one of the most common complaints from homeowners who use it to clean roads and other critical access spots around the property. The tiny, jagged, and sharp edges of the rock salt material generate the lacerations or abrasions that commonly scar cats and dogs.

These particles often get trapped between toes or become entangled in the fur that surrounds the footpads, prolonging contact and increasing the risk of discomfort. There is no such issue with the calcium chloride ice melt. As previously stated, the calcium chloride dissolves practically instantly into a liquid brine, eliminating any materials that may get lodged in between hair or toes.

What’s more, the round-shaped small balls or flakes that are typical for calcium chloride products wouldn’t harm a cat or dog if they walked on them. It would be like if you were walking on a little pea or thin flake.

Rock salt and other similar ice melting products sit on top of the ice’s surface while they dissolve, extending the time it takes to break up the ice. Calcium chloride products, on the other hand, concentrate their dissolving action on a specific area.  They bore into ice up to three times quicker than conventional equivalents by concentrating contact on a limited contact area.

Not only does this allow the calcium chloride in order to penetrate more rapidly and break ice’s link with the underlying surface, but it substantially minimizes the likelihood of a pet walking on the surface, because it will be totally dissolved in a couple of minutes.

Rock salt is not much different than table salt, so it is safe to use. However, because it’s so cheap, there is a tendency to use too much of it on road surfaces. Calcium chloride is corrosive too, but there isn’t the same tendency to over-apply it due to its higher cost. Over time, using too much of either of these products will cause surfaces to deteriorate and break down. Metal and steel near where rock salt or calcium chloride is used will rust and degrade as well. Contractors that apply the correct amount of salt will save money, the environment, roadways, and the properties of clients when they use just the right amount of salt instead of going with the “more is better” theory. Your customers trust you to not only keep their parking lots, roads, and walkways free from snow and ice in the winter, but they also expect you to be responsible and not use products that damage their surfaces and require expensive repairs. For the least corrosive ice melt option, consider Magnesium Chloride products.

Rock Salt has experienced shortages over the years

Every year is different and lately we’re experiencing shortages in a variety of industries. However, it’s been common over the years to have rock salt shortages on a fairly regular basis. This is because the demand for rock salt keeps blowing away mining results. The best way to overcome this obstacle is to order your bulk rock salt early. Also, take time to setup a safe storage area so you can order plenty for the season and not have to worry about moisture degrading the product.

Looking for more information or interested in ordering ice melt products? Contact us by filling out the quick form below.